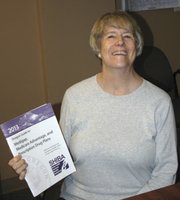 The mystery that is Medicare is daunting to those just signing up or wanting to make changes in their coverage. But two local longtime volunteers are on hand to answer questions.

Joan Silver and Prudence Amick are certified volunteers who have both taken training to become well-versed on the many complex aspects of Medicare coverage.

They offer counseling year-round on enrolling in Medicare, but during the open enrollment period of Oct. 15 to Dec.7 – the time for changing supplemental insurance plans under Medicare — Silver and Amick are busy meeting seniors every Wednesday afternoon at the Mid-Columbia Senior Center to answer their questions. To schedule a confidential appointment call the senior center at 541-296-4788.

Supplemental insurance is in addition to Medicare Part A, which covers hospital stays and Medicare Part B, which covers medical care such as doctor’s visits, x-rays, MRIs, wheelchairs and preventative care. But both Part A and Part B only cover 80 percent of those costs. Seniors commonly buy supplemental, private insurance to cover that remaining 20 percent.

Part A is free, but Part B does have a premium, which is usually automatically deducted from Social Security checks.

“We’re seeing a lot more baby boomers who are just turning 65 and it’s amazing to me how many people don’t understand that Medicare Part B is not free,” Amick said.

Monthly premiums for Part B for most people is around $100, but it varies according to income and penalties.

Supplemental insurance costs vary depending on age, and can range from about $175 to start, up to the $300 per month range by the time someone is in their mid-80s.

Once a drug plan is included, most people pay $300 to $400 a month for their insurance.

“It’s complicated but we try our best when we’ve got people in front of us to make it as simple for them as we can,” Silver said.

Amick said she also has people – healthy seniors – who say, “Why should I have to take Part B and get a supplement while I’m healthy?” Well, “there’s certain penalties if you don’t sign up for a drug plan when you’re eligible” upon turning 65. The penalty is 1 percent of the National Base Beneficiary premium for each month the person does not enroll. So 24 months of delay becomes a 24 percent penalty.

The reason for providing a penalty for delaying enrolling is “they don’t want people not paying into the system and waiting until they have something serious going on and they say, “Oh, I guess I need insurance,” Amick said.

The complexity of Medicare is such that retired professionals come to her and say, “I’ve read the books and I’m completely baffled.”

Another problem she sees is the widow or widower whose spouse took care of everything, and now they have to figure it out for themselves. “They come in and they’re so lost.”

She asks people to bring their actual prescription bottles with them to their confidential appointment so they can look at the prescriptions they take and find the best prescription plan for their specific needs.

While people regularly ask Amick to suggest a plan that’s good for them, she says she is not allowed to give such advice. Rather, she can only describe the options available in the various plans.

Amick will also help people with complaints about Medicare.

Silver and Amick are certified through the Senior Health Insurance Benefits Assistance, which is part of the Oregon Department of Consumer and Business Services.

Locally, SHIBA is overseen by the Area Agency on Aging, located at the Mid-Columbia Council of Governments.

Amick said a paid employee of the Area Agency on Aging used to help people with Medicare, but that position was cut. “The funding has dried up in the last few years for a lot of programs that were funded by the federal government. They’re depending more and more on volunteers to pick up the slack.”