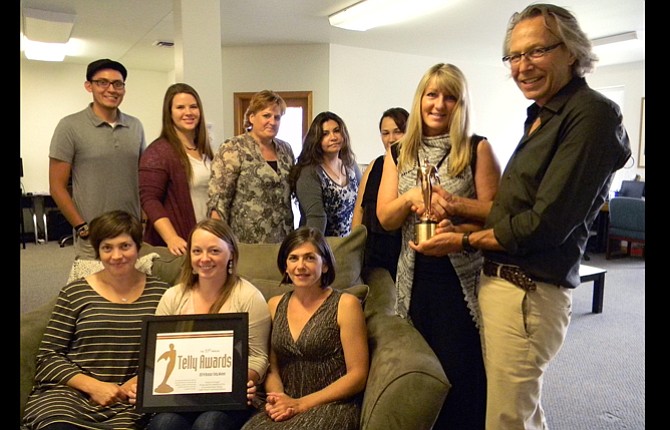 “Vision of Hope 2014,” a video produced by John Hardham of Light Wave Communications to showcase HAVEN’s efforts to prevent sexual and domestic violence in the gorge, has been named a bronze winner in the 35th annual Telly Awards.

The Telly Awards recognizes the best in film and video production, including online content as well as local, regional and cable TV commercials and programs. To watch “Vision of Hope,” go to http://bit.ly/1pHAUEe.

“What we do is gather material to build awareness for the services HAVEN provides and to raise money to support those services,” Hardham, producer of the award-winning video, said.

“Vision of Hope” was chosen from almost 12,000 entries from across the United States and abroad, premiering at the annual HAVEN from Domestic and Sexual Violence fundraising event in The Dalles.

“A lot of the sexual assaults and domestic violence that happens in our community goes unreported, so we believe it’s always important to raise awareness about the services that are available to those affected by violence and what people can do to help,” HAVEN Executive Director and producer of the video, Tara Koch, said. “The challenges we face are often the gaps in services, and in order to make up for those, HAVEN takes on more.”

“I’m doing what I love to make a difference in my community,” Hardham said of the project. “I work for non-profit organizations on projects that empower people. It doesn’t always pay my bills, but it’s worth it. We’re very fortunate to have HAVEN.”

In “Vision of Hope,” local professionals were asked to define their roles and describe what they do to create a compelling narrative and illustrate HAVEN’s role in the community.

Laura Korb, sexual assault nurse examiner at Mid-Columbia Medical Center, Detective Jamie Carrico of The Dalles City Police and Lori Rosebraugh of the Oregon State Police Major Crimes Division all emphasized the importance of HAVEN’s role in the community and the inter-agency effort to prevent and respond to instances of domestic violence and sexual assault.

“We’re lucky in our community to have partners that come together and work so well as part of a sexual assault response team,” Rosebraugh told viewers in the video. “I appreciate Haven’s presence throughout the entire process.”

“Following a sexual assault, the hospital calls a HAVEN advocate. We always have somebody on call 24/7 who’s able to respond in person to that survivor while they’re going through the forensic examination process and to coordinate what follow-up services they might want,” she said.

Program Manager Anna Williams said HAVEN’s mission is to provide access to services and safety to as many members of the public as possible.

“What we’re always trying to do is to build our programs and build our capacity to meet the needs of the community,” she said. “Prevention is part of everything we do. Whatever happened, we don’t want it to happen again. This video highlights the prevention side of HAVEN and how it’s part of the way we do the work we do. It changes our mindset about treatment and teaches people to treat each other with dignity and respect in an effort to change our community so everyone has access to safety.”

“The counties are so spread out, it’s hard to get to The Dalles to access services if you live very far away,” Victor Mondragon, HAVEN bilingual violence prevention educator, said. “That’s why it’s so important to have outreach.”

Mondragon, who joined the HAVEN team in January 2014, has traveled to schools all over the region alongside Taylor Rosenthal, fellow prevention educator, to teach students about the ins and outs of healthy relationships and why fostering equitable ones is so important.

“It’s all about getting people engaged and providing a space for needed conversations to take place that we hope will work to inspire social change,” he said.

Working with community partners, HAVEN’s prevention team organized the first Healthy Teens Relationship Summit in February to bring area high school students, adults and social service agencies together for a day of learning. The goal was to provide an opportunity for youth and adults to have a safe space to have conversations about the issues that affect teen relationships.

On display in “Vision of Hope” were a number of HAVEN Teen Troupe Peer Leaders, students who volunteer for the organization to promote health and equality in all personal relationships.

Also emphasized in the video was that the CERTS (consent, equality, respect, trust and safety) model applies to all kinds of relationships. The more equitable the relationship and the more stable the balance of power, the healthier the relationship will be overall, teen leaders said.

“If everyone used that model in their personal relationships, we’d be done here. It’s about building connections and relationships in a way that works to create a culture of consent in our community,” Williams said. “Maybe by the time my kids are in high school, we won’t need to do crisis response anymore. That’s the ultimate goal.”

A huge part of HAVEN’s success Koch credits to its strong working relationships with its community partners, including local law enforcement agencies, the school district, Mid-Columbia Medical Center and many more.

HAVEN fundraises all year long and is currently seeking volunteers for a wide variety of positions to assist clients and aid in the program’s advocacy work. Volunteer trainings begin near the end of September, so HAVEN encourages all those who are interested to apply now.

READ NEXT TOP STORY: A huge chip on their shoulders