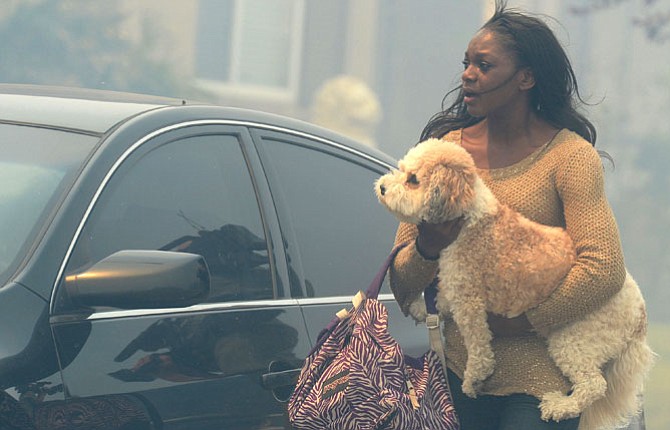 AP Photo/Inland Valley Daily Bulletin, Will Lester
A WOMAN who is evacuating her home carries a dog to a vehicle in smoke from the Etiwanda Fire in Rancho Cucamonga, Calif., April 30. The wildfire driven by surging Santa Ana winds sent a choking pall of smoke through foothill neighborhoods, forcing the evacuation of at least 1,650 homes and the closure of at least seven schools. The fire was reported about 8 a.m., grew to 200 acres by noon, quadrupled in size within a few hours and continued to grow as it roared through dry brush.

RANCHO CUCAMONGA, Calif. (AP) — Firefighters battling a smoky blaze in the foothills east of Los Angeles took advantage of cooler early-morning conditions as they braced for the return of gusty winds that initially pushed the fire in the direction of more than 1,500 homes.

Hot Santa Ana winds were forecast to return Thursday, prompting officials to order nine schools near the blaze above Rancho Cucamonga to remain closed. Temperatures in the area were expected to top 100 degrees. As winds that had gusted to 80 mph Wednesday eased during the evening, mandatory evacuation orders for 1,650 homes were canceled, though residents were urged to prepare to leave at a moment’s notice.

The fire erupted Wednesday morning in the foothills of the San Bernardino National Forest and quickly burned across 1,000 acres of brush. The U.S. Forest Service continued to cite that figure late Wednesday, indicating the fire hadn’t grown for several hours. No containment estimate was given. Meanwhile, more than 700 firefighters remained on the front lines, fighting the blaze with 55 fire engines and four bulldozers. High winds prevented them from using aircraft.

On Wednesday, as the flames raced through heavy brush, some of which last burned a decade ago, homes not even in the fire’s path were threatened. A blaze fanned by gusts “tends to throw embers and brands ahead of itself, sometimes a mile,” U.S. Forest Service spokesman Chon Bribiescas said. “That’s the insidious part of a wind-driven fire.”

Leo Lemelin, 67, and his family busily loaded several cars with belongings as they prepared to leave the area.“We’re trying to pack up everything we can into our cars from 45 years of marriage and eight grandchildren,” he said.

The fire was burning out of control but had run out of fuel in some areas, while firefighters and bulldozers cut away brush in others, Bribiescas said. The only structure reported burned was a fence.

The winds also fanned a handful of small brush fires around Southern California, but they were quickly doused.

At one point, utilities reported about 8,000 people had lost power Wednesday because of downed power lines and other wind-related problems.

The fire erupted in the midst of a heat wave that has sent Southern California temperatures soaring into the 90s in some areas. High temperatures were expected to continue through Saturday, with humidity in the single digits.

Copyright 2014 The Associated Press. All rights reserved. This material may not be published, broadcast, rewritten or redistributed.