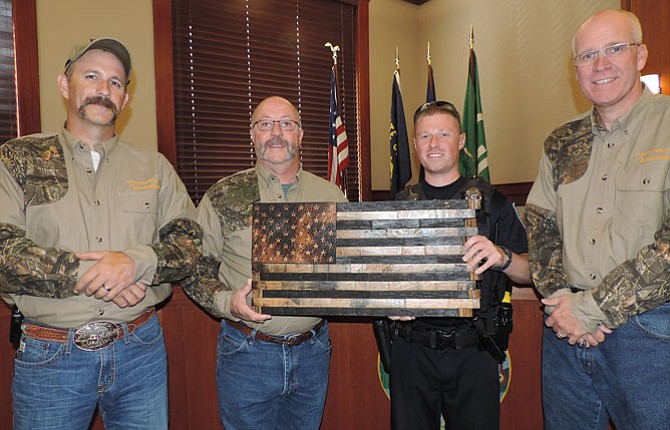 MEMBERS OF Outdoor Adventures with Military Heroes receive a Heritage Flag from the Hood River Police Department. Pictured, from left, are: Hal Woods, a local firefighter and Outdoor board member; Fred Coleman, a National Guard veteran, firefighter and president of the nonprofit group; Kyle Zuercher, an Air Force veteran who arranged for the gift of the flag; and Lane Magill, Chief Deputy for Wasco County who serves on the Outdoor Adventures board.

“It was both a surprise and an honor to be given the Heritage Flag. We, as a group, do everything we can for wounded combat veterans and we were glad to receive this flag on

behalf of them,” said Fred Coleman.

He serves as president of the nonprofit organization that organizes fishing and hunting trips each year for veterans from the region.

The “Barrel to Banner” Heritage Flag is custom made by a Boston, Mass., company of the same name from oak whiskey barrel staves.

It sells for just under $200 and is guaranteed to be an original and not identical to any other flag because colors and finishes vary.

“The Heritage Flag, each one-of-a-kind, serves as a tribute to the men, women and their families who selflessly serve our nation and protect our freedom,” states the company’s website.

Kyle Zuercher, an Air Force veteran and Hood River officer, arranged for the donation after talking with a Heritage Flag representative while placing his own order.

“After telling the general manager that I was a veteran who had been hired by the police force in the city I grew up in, he asked if I would take on the task of selecting an organization or person to receive the flag in this area,” he said.

Zuercher selected Outdoor Adventures because most of its board members are firefighters and law enforcement officials, part of the emergency responder family. “I am also an avid hunter and fisherman so I really liked what they were doing,” he said. “They do good things for a lot of veterans in the area and we want to support that.”

After checking the group out to make sure it met the criteria for active outreach requested by Heritage Flag, Zuercher contacted Coleman and made arrangements for the presentation at the Hood River Police Department.

He said the group wants to make sure as many people as possible have an opportunity to see the flag while visiting various agencies and organizations. He said those plans will be discussed at the organization’s board meeting next week.

This fall Outdoor Adventures will host its first hunting trip for female veterans.

That activity has been added to the spring turkey hunt, fall salmon fishing trip, and doe, buck, elk, coyote and bobcat hunts.

More information can be found on the organization’s Facebook page or by emailing Coleman at medichunter@hotmail.com.

Veterans interested in being included in a drawing for 2016 events, or people wanting to make a donation, can send mail to: Outdoor Adventures for Military Heroes, P.O. Box 9, The Dalles, Ore. 97058.