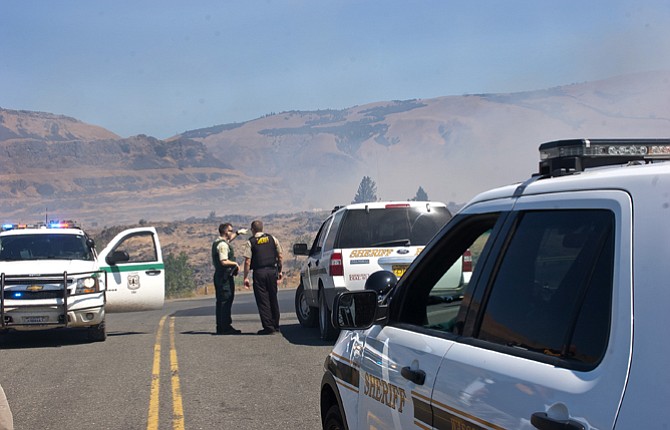 Photo by Mark Gibson
Wasco County Sheriff deputies and a U.S. Forest Service staff consult over the closure of the Taylor Lake area and the Riverfront Trail as a grass fire moves west from Pinewood Mobile Manor toward The Dalles.

A Chronicle reader submitted this photo of the grass fire west of The Dalles. Fire is now contained, as of 12:30 p.m. No structures were lost, according to fire officials. Contributed photo

A 12-15 acre fire that threatened Pinewood Mobile Manor by the Discovery Center this morning is contained and no structures were lost, according to Mid-Columbia Fire & Rescue.

The fire was reported at 10:21 a.m. as a grass fire about a half-acre in size, south of Interstate 84, between the interstate and Highway 30, just west of The Dalles, said Dave Lapof, division chief at MCFR.

A woman was taken from the fire scene by ambulance after burning her feet trying to help put out the fire, Lapof said. The woman who burned her feet was wearing flip flops, Lapof said. Crews had stopped the fire well away from any structures, but left a fire hose for the woman to use. “Instead of keeping things away from her she was going down to the fire and she was kind of left on her own and that’s how she did that. [Ambulance crews] said it wasn’t significant but she’s going to have sore feet for awhile.”

The poolhouse at the mobile home court was slightly damaged, Lapof said.

The fire did jump both directions of Interstate 84 and got onto the north side of the interstate and was burning in some railroad ties, he said. Rail traffic was halted and remains stopped as of noon today.

Interstate 84 in both directions is open, and Highway 30, which was closed for a time, is also open.

Winds blowing to the east took the smoke into The Dalles.

There were no evacuations of the mobile home park and residents were told to shelter in place, Lapof said.