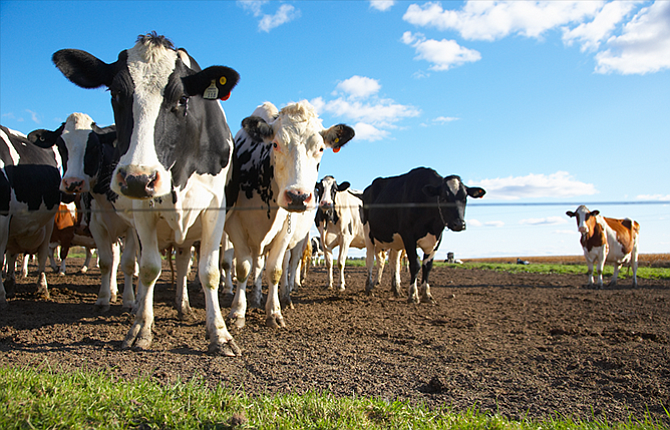 Contributed photo
The Oregon Legislature is considering further regulation of “dairy emissions,” or cow flatulence. Jerome Rosa is the executive director of the Oregon Cattlemen’s Association, which is actively working to stop new rules from being adopted.

Jerome Rosa, the executive director of the Oregon Cattlemen’s Association, is a fifth-generation dairy farmer and is shown explaining how his operation works to a group of visitors.

The Oregon Cattlemen’s Association is concerned that two bills in the Legislature to regulate “dairy emissions,” or cow flatulence, are setting the stage for rules that will adversely affect ranchers throughout the state.

“Our concern is that this would be the first step on a slippery slope,” said Jerome Rosa, executive director of the association.

He said there is no need for new rules because Oregon’s 228 dairies, which are located in 21 counties, are already voluntarily working closely with the state Department of Agriculture, Department of Environmental Quality and Oregon State University scientists to reduce emissions.

Rosa said it will be harmful to Oregon’s economy and nutrition needs if government officials choose to follow in the foot steps of California, which has imposed so many regulations that dairies are struggling, or moving.

California has lost 25 percent of its dairy farms since 2007.

Oregon Physicians for Social Responsibility, an organization with a mission to fight global warming, has called on the Legislature to limit “dangerous air pollution” from large-scale dairy operations.

In a letter to the Senate Committee on Environmental and Natural Resources, more than 25 doctors, epidemiologists and health experts argued that there was “strong evidence” that emissions from massive livestock confinement operations are harmful to public health and the environment.

“We Oregonians are increasingly aware of the risks of air pollution, including greenhouse gases such as methane and nitrous oxide, to our environment, health and livelihoods,” stated Dr. Andy Harris.

“The unregulated and preventable release of air pollutants from industry dairy operations compounds this problem, increase the chance of

asthma and other public-health effects and contributing to climate change-related declines in our shellfish industry.”

Rosa said there is no comparison between Oregon’s good air quality and poor conditions found in the Central San Juaquin Valley in California, which is home to a large cattle feedlot and big dairies. Because these enterprises are sited in a geographical “bowl” with limited air movement, there is a pollution problem that spurred legislative action, he said.

“We’re really fortunate here because we don’t have the stagnant air situation as in California – we have good air flow in all areas,” said Rosa.

To address the issue, California officials have approved a law to reduce methane emissions from manure to 40 percent below their 2013 levels by 2030. Dairy manure is estimated to account for about a quarter of the state’s methane emissions.

State officials are developing regulations that will be enacted by 2024.

California has also charged the Air Resources Board with further regulation of cow flatulence if there’s viable technology to reduce its reported contribution to greenhouse gases.

The new rules are based on a 2013 United Nations’ report that found livestock to be responsible for 14.5 percent of human-induced emissions, with beef and dairy accounting for the bulk of it.

Fifty million in revenue from California’s fee charged to polluters, known as cap-and-trade, is to be used to help farmers buy dairy digesters, which convert methane into energy that’s sold to electrical utilities.

Dairy farmers in California say the funding is not nearly enough to set up digesters in the state’s roughly 1,500 dairies.

They argue that the new regulations will drive up costs when they’re already struggling with five years of drought, low milk prices and rising labor costs. They say creating an “arbitrary” limit on natural gasses is not necessary because cow-produced methane dissipates quickly.

Rosa said the owner of one of these dairies, Greg te Velde, relocated his operation, called Willow Creek Dairy, from California to Oregon. He said the size of the operation in Boardman, which is changing its name to Lost Valley Farm, has spurred conservationists to seek more stringent air quality regulations in Oregon.

Lost Valley will house 30,000 cows that produce 210,000 gallons of milk a day on 7,228 acres of what is now the Boardman Tree Farm. The operation is located a short distance away from Threemile Canyon Farms, one of the country’s largest dairies, with about 65,000 cows.

Lost Valley will employ between 125-150 people when it is up and running, and feed about $50 million back into the local economy, according to a Feb. 9 letter that te Velde submitted to the East Oregonian.

He said the farm is working with IRZ Consulting to develop a zero-waste, zero-discharge system that “is among the best in the industry, and may serve as a template for future operations.”

Te Velde said the farm is in the process of complying with stringent state requirements to obtain all the necessary permits.

“We trust sound science and balanced objectivity within a timely and efficient process will prevail,” he wrote.

Opponents of the dairy have gained ground in the Legislature with Senate Bill 197, which proposes that state agencies gather input from the public and stakeholders before establishing a dairy emissions program by January 2019.

“SB 197 provides critical tools to protect thousands of Oregonians from the harmful aerial contaminants continuously released by these large dairy facilities,” said Hannah Connor, an attorney with the Center for Biological Diversity.

Rosa said a companion bill, House Bill 3308, is under consideration by the House Committee on Energy and Environment. The cattlemen’s association is actively working to stop movement on both measures.

Supporters of the bills, which include Columbia Riverkeeper and Friends of the Columbia Gorge, say they follow the strong urging of the Oregon Task Force on Dairy Air Quality that formed in 2007 to study pollution issues related to these farms.

In findings released in 2008, the task force recommended that rules be adopted that protected public health and also provided enough flexibility to keep small dairies viable.

In addition to his job of advancing the economic, political and social interests of the Oregon cattle industry, Rosa is a fifth-generation dairy farmer. He has 600 cows on his farm near Woodburn.

“There is a lot of discussion about the health problems that dairies supposedly cause but I was born and raised on a dairy farm and so were my kids.

“Not only are we all healthy but my grandparents lived into their 90s and my father is 89 and my mother 85. My parents are some of the healthiest folks you will ever see,” he said.

“I guess growing up on a farm builds up a healthy immune system.”

What needs to be factored into any discussion about further regulation, said Rosa, is the benefits provided to Oregon by its dairies.

Milk, the official beverage of Oregon, is produced by 125,000 cows and is the fourth most valuable agriculture commodity.

Each year, the dairy industry feeds more than $475 million into the state’s economy, according to the state Department of Agriculture.

Because of good stewardship practices undertaken by farmers, Rosa said the state consistently places in the top five for milk quality, which can only be achieved with good animal husbandry practices and healthy cows.

He said Lost Valley will provide jobs that are sorely needed in Morrow County, a rural area with a struggling economy, and state officials should also take that need into consideration.

Rosa said Oregon’s dairy farmers have voluntarily embraced Best Management Practices and work with state agencies and researchers to continually come up with new ways to improve their operations.

He said, in 2008, the task force urged formation of a Dairy Air Advisory Committee and funding for a program to find solutions that met environmental and economic needs.

The task force wanted to see a reduction of ammonia, methanol and odors, with technical decisions based on a review of available science.

According to Rosa, dairy farmers have made many changes since 2008 that should be factored into current decisions. Not only has feed been adjusted to reduce cow flatulence, new methods of removing and treating manure are in place.

“We are always looking for better ways to manage our business and protect the environment,” he said. “SB 197 and HB 3308 are trying to fix a problem that doesn’t exist in Oregon.”

Rosa urges county officials and farmers throughout Oregon to ask legislators to take no action.