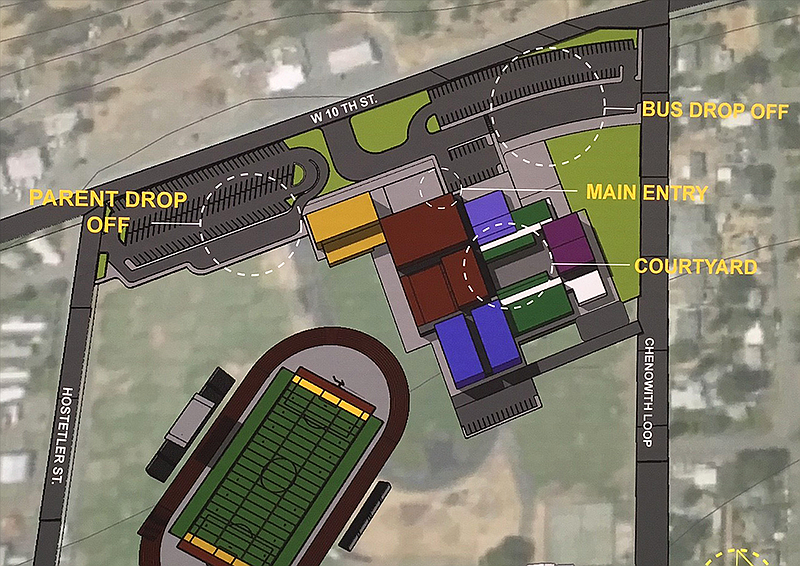 Photo by Neita Cecil
This image shows the site that a citizen committee has unanimously chosen for a potential new high school in The Dalles. It is where Wahtonka Community School currently stands. Committee members created two concepts envisioning the high school on that site, and aspects of both concepts will be presented at the final high school master planning committee meeting, set for May 3 at 6 p.m. at Fairfield Inn.

The Wahtonka Community School, pictured above, is under consideration as a site for a new The Dalles High School.

A citizen committee has unanimously selected a location for a potential new high school: the corner of West 10th and Chenowith Loop, where Wahtonka Community School now stands.

Discarded was the idea of building a new high school on the hillside above Wahtonka, with an architect saying it would be much more expensive to build there.

Architect Richard Higgins of Portland-based BLRB Architects, who is facilitating the series of committee meetings – which any citizen is welcome to attend and participate in — will bring a final concept back to the committee’s last meeting, set for May 3.

North Wasco County School District 21 is considering seeking voter approval in November for a 50-year bond authority of $235 million, with plans to replace nearly every school in the district.

The district pledges to keep the bond rate at $2.99 per $1,000 of assessed property value for the duration of the bond authority.

It would replace the high school and three elementaries, building one new building every five years over the next 20 years.

The district will conduct surveys in May or June to test the waters of public opinion before deciding whether to go forward with the vote.

The appeal of building on the hillside was that it would preserve the full 29-acre school property with Wahtonka on it for sports fields. However, Higgins said it was possible, once Chenowith Elementary School is relocated elsewhere, to potentially fit all needed sports fields on that property.

The exception could be tennis courts, which the committee suggested placing on the hillside property.

The committee previously created three possible school concepts, two on the Wahtonka property and one on the hillside. Aspects of both Wahtonka concepts will be combined into a final proposal, with the parking layout from one used with the enclosed courtyard of the other.

The track will also be oriented more tightly to the school. Both proposals had it angled, but that left unusable space, Higgins said. The building layout itself will be tightened up to gain more space.

One suggestion was to seek a variance from land use rules to allow a third story on the high school. Higgins suggested sticking to two stories so they didn’t have to “fight city hall.”

In recent months, the effort to promote the bond request has stepped up, with school board members and others speaking to a variety of local groups.

Their message is that the district’s buildings are old, expensive to maintain, crowded, and unsuited to modern education. The new buildings would enhance security and fire safety standards, be modernized and easier to maintain.

Five of the district’s six schools in The Dalles are in poor condition. The exception is the middle school.

The Dalles High School student Tyler Vassar said if the high school was an open campus, nobody would use the courtyard.

It is not known at this point if the campus will be closed, but many high school campuses commonly are, said Don Carter, director of facilities for D21.

Vassar was on the design team, along with two other high school students, that came up with the hillside concept. He was asked his thoughts on the final option being on the Wahtonka property instead.

He said, “I think just a new school in general” is what he supported.

The hillside concept required putting most of the parking on the Wahtonka side of 10th Street, which would require building a foot bridge over 10th to connect the school and parking lot. Higgins said a similar skybridge, which would have to be handicapped-accessible so it would need an elevator, was being built in Portland for $5.2 million.

Alan Easling said, “I think just the word ‘skybridge’ is going to turn a lot of people off.”

Higgins said since the hillside property would be built into a slope, it would require large and expensive retaining walls. Just grading, or leveling, the property could cost $5 million.

The hillside property, Higgins said, required steeper than ideal driveways, and because it was built into a hill, would not have the road all the way around it that fire departments want for firefighting. And if a road was added, that would require a higher, even more expensive retaining wall.

School Board Chair Kathy Ursprung said the concept of dividing the campus, with classrooms on the hillside and the gym and auditorium on the flats, had not been considered.

A student said four-minute passing periods between classes would make that prohibitive, if a student had to get from a classroom on the hillside to P.E. on the other side of the street.

On the updated proposal that he will bring back to the committee, Higgins said the track, with the football field inside, could be oriented right next to the gym to provide second-story access to the grandstands and also a pressbox.

Higgins said they have also learned since the last committee meeting that the five tech support staff for the school district were housed at Wahtonka Community School — formerly called Wahtonka High School — and the district needed to decide where to move them if Wahtonka is torn down. The district’s data center itself is actually housed in leased space at Columbia Gorge Community College, but critical equipment is also housed at Wahtonka. That new space will require 3,000 square feet.

It will cost about $1 million for that space, Higgins said.

School board member Ernie Blatz said the goal has been to move all the sports fields to one location at the Wahtonka property.

Higgins said the district could consider dual-use fields for opposite season sports, which is common in other school districts. If the football field is enlarged, it could also be a soccer field.

Kurt Evans, the high school’s vice principal, who said he was speaking in his capacity as a parent, asked if a swimming pool could be added, and was quickly shut down. D21 Facilities Director Don Carter said it would require too much maintenance.