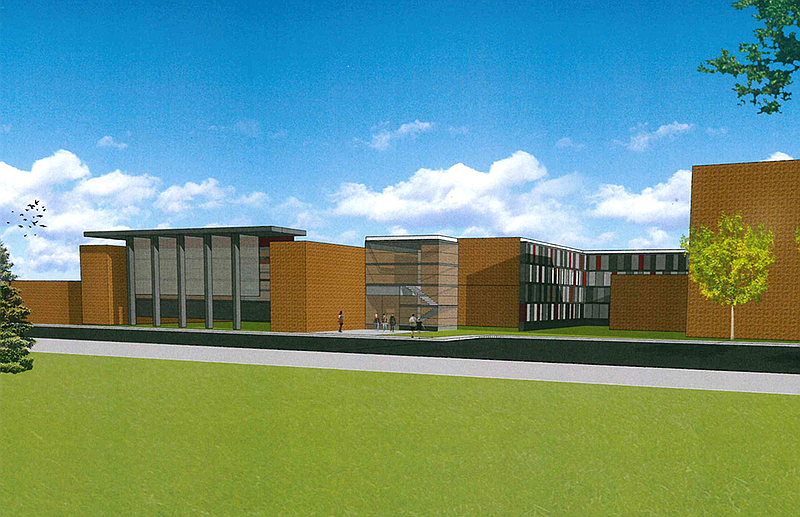 Contributed photo
A new high school is central to the D21 bond proposal being put to voters in November.

Some 50 people attended the kickoff event Aug. 4 for supporting the $235 million bond measure that goes before voters in November to replace four schools in The Dalles.

Phil Brady, a teacher at the high school, said the group was participating in something historic. “There’s not many times when something this big gets started.”

He noted that the building the kickoff was being held in was rather warm. He said it wasn’t planned, but it demonstrated how hot unairconditioned schools get in September and late spring. “This is what our classrooms are like,” he said.

Speaker Jim Wilcox, former The Dalles mayor, said he was a fiscal conservative but he was voting for the measure, which would personally cost him $800-$1,200 a year, because it was a community need.

In fact, he said that touting the proposed new high school and three new elementaries as being “for the kids” is “not gonna wash... It’s for the community as a whole, it will make it stronger.”

The Strong Community Schools committee that is backing the bond has a Facebook page by that name. Supporters of the bond have opportunities for canvassing, letter writing, hosting gatherings, and fundraising. Yard signs can be picked up at Ernie’s Locks & Key’s downtown at 605 E. 2nd St.

A benefit concert for the bond featuring Irish band Barley Draught is set for Sunday, Aug. 26, at 7 p.m. at St. Peter Landmark.

The bond measure would authorize the school district to issue five bonds over 20 years, with a 30-year repayment for each bond, for a total of 50 years of payments.

Wilcox said he’s heard people say, “I don’t want to give a check for 50 years and not know what they’re building.”

But he thinks having future school plans fluid is a good thing, since future technological needs are unknown. He cited the middle school, which was hard wired for computers, and 10 years after it was built, it was obsolete because computers went wireless.

He said the public has chances to participate in both the design of the schools, through planning committees, and in financial oversight of the process, through the bond oversight committee.

He said the community let the public pool fall into disrepair and then close. “We can’t do that to our schools, that’s our heart and soul.”

He said Dry Hollow, Wahtonka High School and Chenowith Elementary were all built in the 1960s, during the country’s worst period of public building construction. It’s all glass and aluminum and flat roofs, with no air conditioning, he said. “It wasn’t built to last.”

He also lauded the district’s chief financial officer, Randy Anderson — who he went to school within Enterprise — as the smartest person he knows.

“I have complete trust in him,” Wilcox said. “He figures out the easiest hit on the taxpayer to get the job done.”

The first four bonds would replace schools —and immediately make interim upgrades to schools that have to wait as long as 20 years for replacement — and the fifth would upgrade the middle school and finish other projects.

It would cost no more than $2.99 per $1,000 of assessed property valuation. Because more than two-thirds of the properties in D21 lie within the former District 12 and have already been paying for nearly 20 years on the middle school, their taxes would only see a net increase of $1.34 above the $1.65 per $1,000 that they are paying now.

Since property owners in the former District 9 have not been paying off the middle school, their taxes would go up $2.99 per $1,000.

There will be one year of overlap when the middle school is being paid off and the new bonds would start. During that year, the entire district would be assessed just the $1.34 amount, to keep it level across the district.

He cited one community that replaced all its schools, “and it changed the community, and I think we can do that here.”

Philip Mascher agreed, saying, “There is kind of a pervasive, self-deprecating negative perspective about the community. ‘Oh, nothing ever changes; oh, we’ve heard that before.’”

He said the important psychological effect of getting the bond passed “is for the community to demonstrate to itself that it is willing to invest in itself. An umbrella effect over everything that will have a spiritual impact … to how people look at living here.”

D21 board chair Kathy Ursprung said a lot of work has been done to improve schools academically, noting a sharp increase in graduation rates — at 87.1 percent, it is well above the state average of 77 percent.

She said the high school has increased student participation in Advanced Placement courses by a third, added career classes, and the district is working to improve attendance and classroom readiness.

She said safety is a top goal in replacing schools. The high school has 26 entries, for example, and a new high school would have secured entrances.

She said the first bond would pay off current debt the district has, freeing up $400,000 a year to go into operational costs.

Kathy Holman said the process would involve the public. “We are doing it the right way, no one person or one group is going to be in charge of this thing.