Rangers have 4-2 record at the start of league play 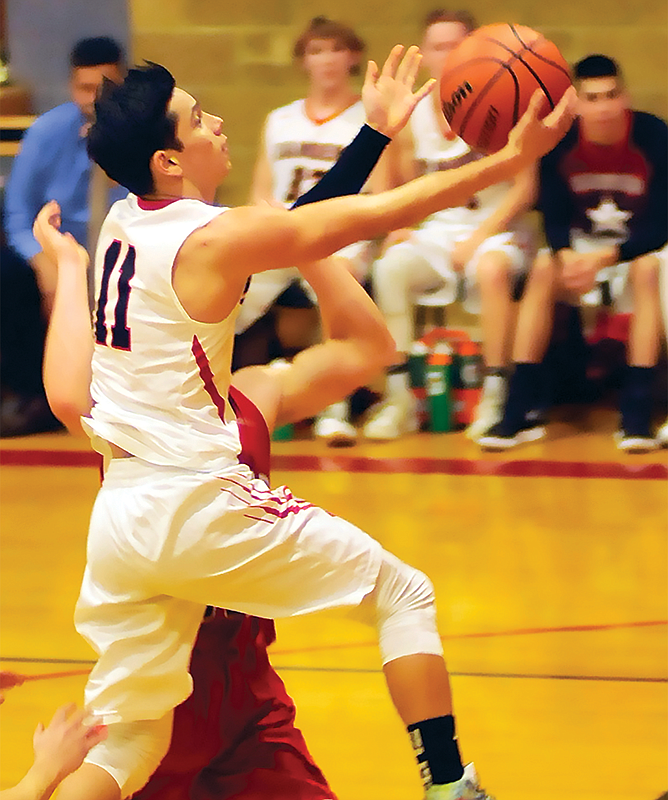 Photo by Ray Rodriguez
Anthony Thomas splits a defender in 1A basketball action Thursday versus Columbia, of White Salmon, Wash. Thomas and the Dufur Rangers won, 56-39.

The Dufur boys basketball team salvaged a split in two weekend road contests with an 80-69 loss Friday against St. Paul in what was a rematch from last month’s state football championship game, and Saturday, the Rangers bounced back for a 79-70 triumph against Perrydale.

The Buckaroos then outscored the Rangers by a 28-16 margin to pick up their fourth win.

Radcliffe dropped 24 points, 14 in the second half; Bales tacked on 14; McLaughlin was good for 12; Masterson wound up with eight and Jim scored four points.

Jaidyn Jackson dropped 46 points, 18 coming on six 3-pointers, to lead a St. Paul team that ended action with 24 baskets, 12 from long distance, and went 18 of 22 on free throw attempts.

At home Thursday versus Columbia, of White Salmon, Radcliffe racked up 16 points, McLaughlin added nine and Masterson had seven points, as the Dufur Rangers won their third straight game, 56-39.

Overall, the Rangers hit 26 field goals, two 3-pointers, and shot 2 of 4 from the line.

Bales and Cole Kortge scored six points apiece and Derek Frakes was good for four points to round out the scoring leaders.

Following that matchup, they then wrap up the weekend with home a matchup at 5:30 p.m. Saturday versus Ione.

After suffering their first loss of the year, 49-47, at home to Trinity Lutheran, the Sherman Huskies won two games for first place in the Holiday Hoops Classic boys division this past weekend in Klamath Falls.

Friday against Hosanna Christian, Sherman had a nip-and-tuck showdown and found the bounces to secure a 52-51 win.

No game stats were submitted as of press time.

Up next, the Huskies (5-1 overall) travel for a league matchup versus the Ione Cardinals at 7:30 p.m. Thursday and then hosts Condon-Wheeler at 5:30 p.m. Saturday.

Early deficit too much for SWC

The South Wasco County Redsides fell behind 25-12 through one quarter and trailed 55-37 after three periods and finished on a 15-5 fourth-quarter run in a 60-52 road loss Friday versus Condon-Wheeler.

For SWC (4-2 overall, 0-1 league), Garrett Olson scored 34 points, Oscar Thomas checked in with 17, Alex Stebbins had a point and five steals and Tanner Davis finished with six steals, as the Redsides totaled 22 field goals, four 3-pointers and made 4 of 8 free throws.

Condon nailed 24 field goals, six 3-pointers, five coming in the first half, and hit 6 of 13 free throws, as Cooper Johnson led the Knights with 19 points and Hunter Winslow tallied 16 points.

The Redsides had back-to-back league contests Monday (Mitchell-Spray) and Tuesday (Arlington), and finishes off the week in Oregon City at North Clackamas Christian with a start of 6 p.m. set for Friday evening.

On Thursday, Dec. 27, SWC takes a trip down to Molalla to face No. 24 Country Christian