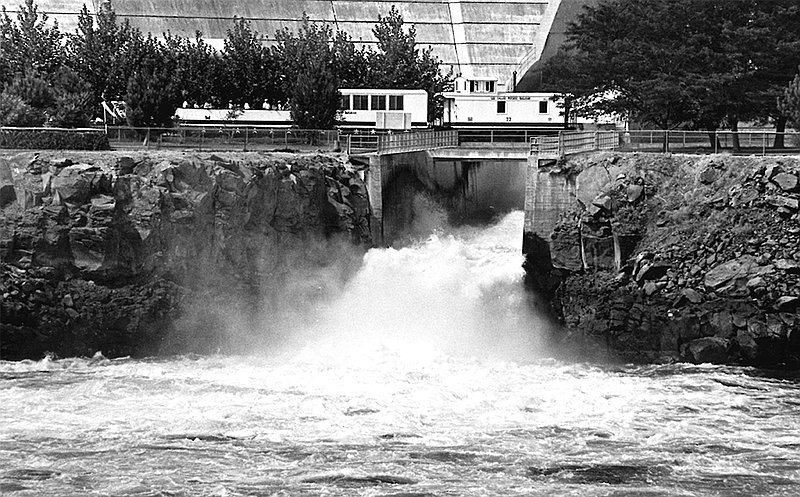 Last week’s History Mystery, above, was scanned from a print found in the archives of The Dalles Reminder. It was published Aug. 5, 1982. The caption reads, “Sand battle continues. Oregon State Highway Department is building a road on sand dunes east of The Dalles. The road will provide construction equipment access to the area, as the contract for a dune-stabilization project is expected to finalize by the end of this month. Work on the dunes started about a week ago. The stabilization project is an effort to stop the shifting sands from spreading across the eastbound lane of Interstate 84, which is a constant problem for the highway department. The job could take about 5 weeks to complete.” The photograph was taken by Greg Paul.

Although a “constant problem” for the highway department, many area residents remember the huge sand dune fondly.

Terray Harmon said when he was in junior high, many of the boys made “surf boards” in wood shop for sliding down the dunes.

Jim Johnston wrote that “before the sand dunes were covered by all the rocks that area was a fun place to go and play and explore the shifting sands.” But the drifting sand was a constant problem for the drivers of the Columbia River highway below, he said.

The project described above successfully stopped the sand from drifting, with both rock work and the planting of Euoropean beach grass.

“Ahhh! That looks like the wonderful sand dunes that once were just east of here on I 84,” wrote Arlene Neumayer. “The wind frequently blew it onto the highway requiring the highway department to remove it and eventually plant over it to stabilize the shifting sands. Ben and I and our two kids had so much fun playing on those dunes, frequently inviting friends and relatives to enjoy it with us! I still look longingly at the now covered-over hillside as we drive east on I 84, remembering the fun times our family enjoyed playing there.”

“They fought it for years, blowing on the highway and railroad track,” Gary Conley said of the dune. “They dumped that shale rock on there and worked it in with a sheep-foot roller and boy, it really made a difference. Nobody thought it would work, but they put the grass seed in it and it’s been good ever since.”

A “Sheep’s foot roller” is a large, heavy roller consisting of steel drums on which projecting lugs (that resemble sheep feet) are fixed. They are used for compacting fine grained soils.

“I remember playing on the sand dunes when I was younger,” wrote Gary Elkinton. “Now there is a pull over area for vehicles where the sand dunes came to a point.” Chuck Rinck, who commutes between The Dalles and the John Day Dam where he works as an electrical engineer, said the dunes were around milepost 92 and 93.

It wasn’t just families that came to the dunes. Mary Batty remembers that at one time, a company brought a whole bunch of models to the dune. “They took pictures of them in the sand in their swimsuits,” she remembered. “It really wasn’t summertime. My mom took me out there, and I saw that.”

Todd Weller remembers that the dune could generate some pretty big sand storms, back in the day.

The Dalles School Board will appoint members to its Long-Range Planning Task Force during its meeting Thursday, Oct. 8.

Material stored next to a wall heater caught on fire in a doctor’s office in the Medical Arts Building at 414 Washington St. Tuesday night. Charlie Norris, fire marshal for Mid-Columbia Fire & Rescue District, said the wall heater turned on and set fire to a cardboard box and items stored on a rolling cart that had been left next to the wall heater.

Does that newer home in your neighborhood fit in? Does it look pretty much like the others, or jarringly different? The concept is called “neighborhood compatibility” and city councilors attest it is a hot topic. The Dalles Mayor Robb Van Cleave said at a recent council meeting he feels neighborhood compatibility is an issue. Former councilor Sean Barrett agreed: “In my term that is probably the most frequently brought up concern.”

Manufactured homes sited in The Dalles must meet the same design standards as traditional homes — plus five more. A 1989 state law forbids discrimination against manufactured homes: they’re allowed anywhere a traditional “stick-built” single-family home can go. But the 1989 law also allows jurisdictions to impose up to six siting standards on them.

Darth Vader is packing ‘em in at Ray Schultens Ford. Black as death itself in the classic costume from the sensational hit movie, “Star Wars,” Vader is gentle as a lamb and handles droves of kids better than a kindergarten teacher. “We had 2500 people through here between four and six o’clock tonight,” Clark Claymon, general manager for Schultens Ford in The Dalles said.

The Dalles City Charter requires that when property owners are to be assessed the cost of public improvements in their neighborhoods, at least two thirds of them must vote no in order to defeat the proposal. This is one item being looked at during the study for revision of the city charter.

CONDON, Ore. (UPI)—Supporters of an anti-nuclear power initiative will appear in court Monday to argue that the question should be placed on the Nov. 7 general election ballot even though the state attorney general has ruled the measure is invalid. Arguments will be heard on a writ of mandamus challenging the Gilliam County clerk to put the measure on the ballot. Portland General Electric has proposed building a $2.5 billion nuclear facility inside the county’s boundaries, but court actions have forced more hearings on the utility’s plans.

WASHINGTON (UPI)—The Senate voted Friday to give middle-income Americans $3.7 billion in tax relief, but turned down a Republican plan for a whopping $230 billion across-the-board tax cut.

An association which began in a German prisoner of war camp has been renewed here by attorneys Vernon Burda and H. H. Halstead. Halstead has arrived here to practice law as a partner of Burda, the two being associated with Howard Dent Jr. in the law offices at 106 E. Fourth Street. Burda and Halstead became acquainted when both were in an airmen’s prison camp in Germany.

An across-the-board pay increase of $10 a month, based on the cost-of-living index of the federal Bureau of Labor Statistics, was approved for city employes here last night. The city council voted the increase and authorized preparation of a supplemental budget after hearing a report by City Manager Robert Laursen.

Farwell Booth, chairman of the nominating committee of The Dalles Chamber of Commerce, submitted the names of 20 nominees for positions on the Chamber’s board of directors at a meeting of the board yesterday at The Dalles Hotel. Also presented to the board was the proposal pending before the Public Utiliites Commission of Oregon by Northern Utility Co. to serve The Dalles with natural gas.

Recommendation that a sub-agency be established at Celilo by the United States Indian service during spring and fall fishing seasons has been made to the federal government by the superintendents of the Warm Springs, Yakima and Umatilla agencies and by United States District Attorney Carl Donough, the latter official divulged at the trial council this morning at Hotel Dalles.

A cooking and canning school will be a feature four afternoons next week in the dining hall of the Odd Fellows lodge rooms, under the sponsorship of Montgomery Ward & Company.

Fascist Italy today formulated a broad racial program affecting 70,000 Jews and banning marriage between Italian and non-Aryans. The regulations, announced by the fascist grand council, were even more drastic than expected inasmuch as they applied to Gentiles as well as Jews. Hundreds of Italian and foreign Jews wept as they learned of the council decisions.

PRAGUE, Czechoslovakia, Oct. 7. (UP)—Czechoslovakia will accept perforce a decision of the international Sudetenland commission granting new concessions to Germany at Cezchoslovakia’s expense, it was understood today. The government sought to prepare the people for the shock of learning that Great Britain and France had agreed to give Germany new territory. 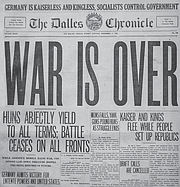 Front page of The Dalles Chronicle, November 11, 1819, announcing the end of World War I.

More than five hundred people attended the funeral services of Walter Scherrer, the first local boy to die in the service of his country, which were held here yesterday afternoon at the Elk’s temple.

J. B. Kirk, proprietor of The Dalles Iron Works, who has been confined to The Dalles hospital and his home for the past 10 weeks by a severe illness, was able to be taken to his place of business yesterday for the first time since his illness.

LONDON, Oct. 7.—Successful bombing expeditions against Kaiserlautern, Pirmasses, Mezieres, Thionville, Courcelles and the airdromes at Morange and Frescaty were reported in Sunday’s official statement which was issued by the independent air force.

PARIS, Oct. 7.—The Germans are burning villages and towns behind their lines along the whole front from Lille to Rheims. This is belived to presage a retirement in several sectors. South of Cambrai, the enemy is reported already to have fallen back two miles on a seven-mile front. At least a score of places are in flames.