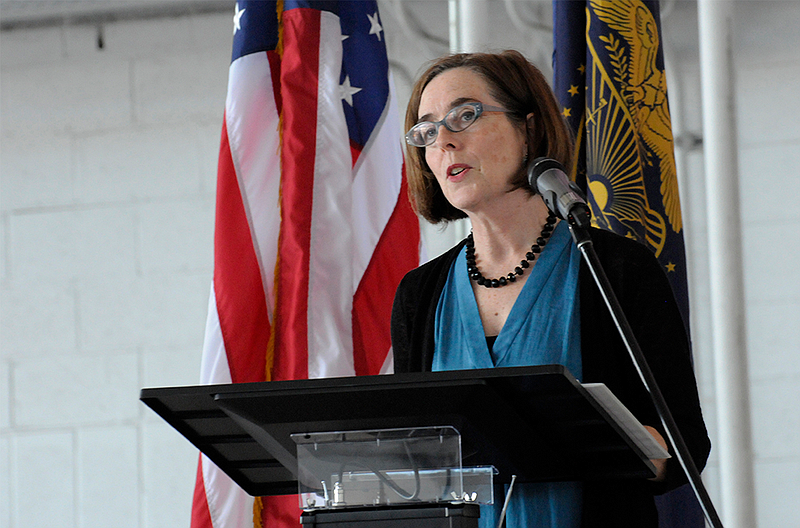 Democratic Gov. Kate Brown, the nation’s first openly bisexual governor and the face of progressive policies such as no co-payments for reproductive health care, is seeking a final term as Oregon governor. On Nov. 6, she is up against a moderate Republican, Oregon Rep. Knute Buehler of Bend, who she defeated in a 2012 race for secretary of state.

As a Democrat, Brown enters the race with an advantage among the state’s liberal-leaning electorate. Her campaign has focused on her wealth of political experience beginning in 1991 and has sought to discredit Buehler’s claim to support pro-choice policies.

In response to Buehler's outreach to Independents, nonaffiliated voters and even Democrats, Brown has highlighted the times when she brought conservatives and liberals together to address shared problems. Last year, for instance, she negotiated with Republicans to secure their votes for a $5.3 billion transportation package.

“I’m the only one in the race that has a track record of bringing Oregonians together to tackle difficult issues facing Oregon,” Brown said during an editorial board meeting at Pamplin Media Group on Sept. 19. “I’m a consensus builder and a collaborator. And that's the same kind of strategies I’ll use if Oregonians give me the opportunity to serve as governor for four more years.”

Here are the specifics on where she stands on the issues:

One of her top priorities for another term is to improve the state's four-year high school graduation rate. Only 74.8 percent of high school seniors earned a diploma in 2016, making Oregon's the third worst on-time graduation rate in the nation. The first part of her strategy is to follow the statute that voters approved with Measure 98 in 2018.

Another of her priorities is to increase the number of insured adults from 94 percent to 99 percent and insured children from over 98 percent to 100 percent.

Brown has pledged to request $370 million from the Legislature for affordable housing incentives and housing assistance in the next two years. Since she became governor, lawmakers have allocated $300 million to assist in building affordable units, homelessness prevention programs and rental assistance. Oregon Housing and Community Services has awarded subsidies and tax credits to build about 15,000 units in the past three years.

Next year, Brown plans to again introduce failed legislation to prohibit transfer of a firearm for 10 business days if Oregon State Police are unable to determine whether the recipient is eligible to receive the weapon. The proposal is known as closing the “Charleston loophole.” She supports raising the legal age from 18 to 21 to purchase an assault rifle and a ban on bump stocks.

The governor supports and her staffers are active in helping to craft legislation to create what is known as a cap and trade program called “Clean Energy Jobs.”

Cap and trade programs set an allowance, or a cap, for the amount of carbon dioxide industry can emit free-of-charge. Any business that released more than that amount would be required to buy credits at auction to offset their emissions. The proceeds of those purchases would go toward investing in projects aimed at stemming climate change.

She also was a player in passing the state's Low Carbon Fuels Standard to reduce the intensity of carbon in fuel and the statewide plan to gradually abandon coal-generated electricity.