Candidates heard ‘Before the Ballot’ 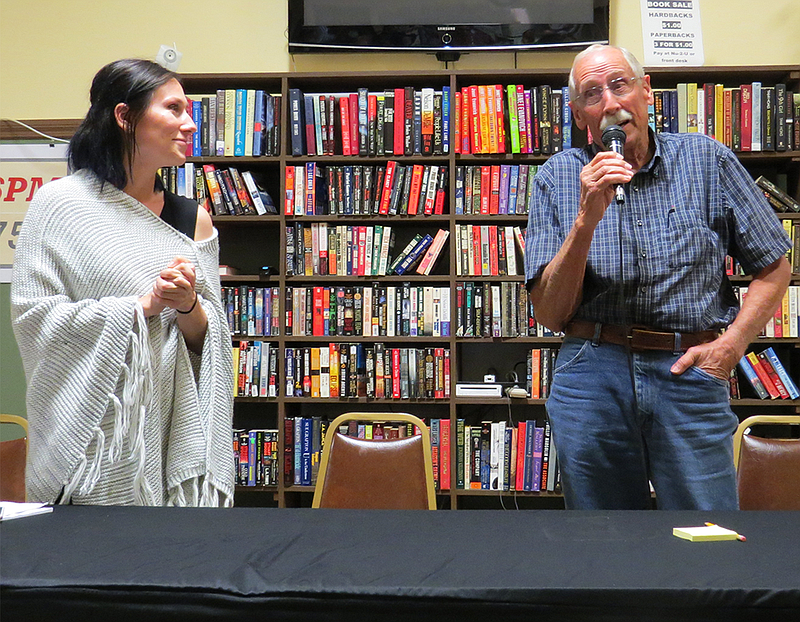 Photo by RaeLynn Ricarte
Tiffany Prince and Russ Brown, both vying for the Position 3 seat on The Dalles CIty Council, mix humor with campaign messages.

Editor’s Note: This is the first of two stories highlighting comments made by local and state candidates during a public forum in The Dalles. This article centers on city council contenders and a second story on Wednesday will feature candidates for state office.

Distinctly different visions for the future were shared by two men seeking a seat on The Dalles City Council at Tuesday’s “Before the Ballot” forum.

John Fredrick, running for the at-large position, said he wanted to build on the good work done by Mayor Steve Lawrence and the current council.

“I’m very pleased with the direction the city has gone in six years. We have moved forward, and I want to see that continue,” said Fredrick.

He is a small business owner being challenged by Rod Runyon and Brian Stevens in the Nov. 6 election. The position is currently held by Taner Elliott, who will not seek re-election.

Fredrick said opposing factions in town needed to unite to get things done that improved the quality of life for all citizens.

“We are one community,” he said. “If everyone will work together, we will get a lot accomplished.”

Chip Wood, a property manager with a carpentry background, is seeking to oust incumbent Tim McGlothlin from the Position 1 seat.

Wood countered Fredrick’s stance by saying there had been a lack of transparency in decision-making by the mayor and current council. He said failure to heed warnings and follow state rules had resulted in Councilor Elliott being found in violation of state rules.

Wood filed the complaint against Elliott with the Oregon Ethics Commission after airing his concerns about a potential conflict of interest at a city meeting without resolution.

Last year, Elliott was found to have violated two conflict of interest laws and two for misuse of a public office. That determination was made by the ethics commission because Elliott participated in decisions that benefitted his development company.

Wood said Tuesday that the actions of Elliott, Lawrence and other council members had divided the community and it was time for healing.

“I think that’s a problem that could be easily solved,” he said. “I don’t really want to change The Dalles, I just want to improve things for everybody.”

McGlothlin, a retired educator, was out of town and unable to be present for the two-hour candidate’s gathering at the Mid-Columbia Senior Center that was sponsored by The Dalles Area Chamber of Commerce.

Rodger Nichols, director of broadcast Gorge News Center and Mark Gibson, news editor of The Dalles Chronicle, were the moderators.

At large candidate Runyon, an outgoing Wasco County Commissioner and retired insurance agent, was present. Stevens, an anesthesia tech at Mid-Columbia Medical Center and head coach of the high school girls’ basketball team, was not there. He had resident Rob Denning serve as a stand-in to present his point of view.

Runyon said he looked forward to the opportunity to use his experience from eight years on the county board overseeing a $58 million budget, eight years as a port commissioner, plus four years as a city planning commissioner. to help guide policy decisions and further economic development.

“I believe my past experience, insight and balanced thinking would be helpful to the city council,” he said.

Denning said Stevens wanted to help the business base thrive.

While Runyon, Fredrick and Wood thought the city needed to pursue expansion of its urban growth boundary to aid in economic development, Denning said Stevens wanted it clearly proven there was a need before pursuing that goal.

Changing the boundary is complex, said the three proponents, given that the land to be incorporated lies within the federally-protected Columbia River Gorge National Scenic Area.

“We’re in a situation where our advocacy is extremely important,” said Runyon. “We are in a unique place on the Columbia River border and have to be able to grow.”

Fredrick said: “We are affected by what other government bodies are forcing on us by mandates and what’s coming out of Salem. We need to try to change this, so we can do more building.”

Wood also favored expansion of the boundary because he said The Dalles was already constrained by the river and agriculture lands.

“I think it’s something we need to keep pushing because it will help The Dalles sustain some kind of growth,” he said.

As a top priority, Stevens wants to facilitate more educational opportunities to provide high-tech firms, such as Google and Insitu, with a skilled workforce.

Runyon said it was vital to get the century-old Dog River pipeline replaced to avoid a disruption in water service, among other infrastructure projects.

Fredrick wanted to see more vertical housing downtown to get more people out and about, which would support restaurants and stores.

Woods said he wanted payments made by Google in lieu of property taxes to be more equitably distributed.

He felt each taxing district within the Enterprise Zone that provided the internet search giant with reduced costs should get the same percentage of funds they would have gotten in tax payments.

“I think that’s just fair and equitable for everybody,” he said.

The interchange between incumbent Russ Brown, a retired contractor, and challenger Tiffany Prince, executive assistant to the Columbia Gorge Community College president and board, was filled with humor — and a lot of talk about roadways.

Both individuals are seeking the Position 3 seat on the council.

Although Brown had publicly stated he would not run again, he decided to seek a second term in order to get more work done on city streets.

“I readily admit it’s a lot more difficult to get change in government than I anticipated,” he said.

He felt after meeting with Prince that she would also be a good fit for the role, but thought his experience would be more beneficial.

“I’m not looking to reinvent the wheel or set the world on fire. I just want to finish what I started,” said Brown.

Prince agreed that more focus needed to be put on infrastructure improvements and public safety, but felt it was time to approach these challenges with a new perspective.

“I want to provide a different kind of insight — younger,” she said to laughter from the audience.

She felt her experience with the public budgeting process and knowledge of state meeting laws and parliamentary procedure would benefit the council.

“You can’t please everyone but we can try and make it better for the majority, no matter what the problem is — and the streets,” she said of her top priorities.

Richard Mays, the sole contender for the role of mayor being vacated by Lawrence, said that he was looking forward to using his experience from a 28-year career in government service to benefit residents.

He said the role of an elected official was to set legislative policy that was enacted by staff. He said problems arose when those roles were confused or reversed.

“When you keep those things separate, you’ll have a lot more success,” said Mays.

His top priority is to “restore civility to city council meetings and build consensus that will bring people together.”

After meeting with more than 150 community members, business officials and civic leaders, and 10 groups, Mays said he had a rudimentary understanding of what people wanted to see done in The Dalles to improve their quality of life.

He announced that he would be creating three new commissions to work on urban renewal and other issues, although he did not say what tasks the advisory groups would be working on.

Mays said volunteers would be sought to serve on the commissions after he takes office in January.