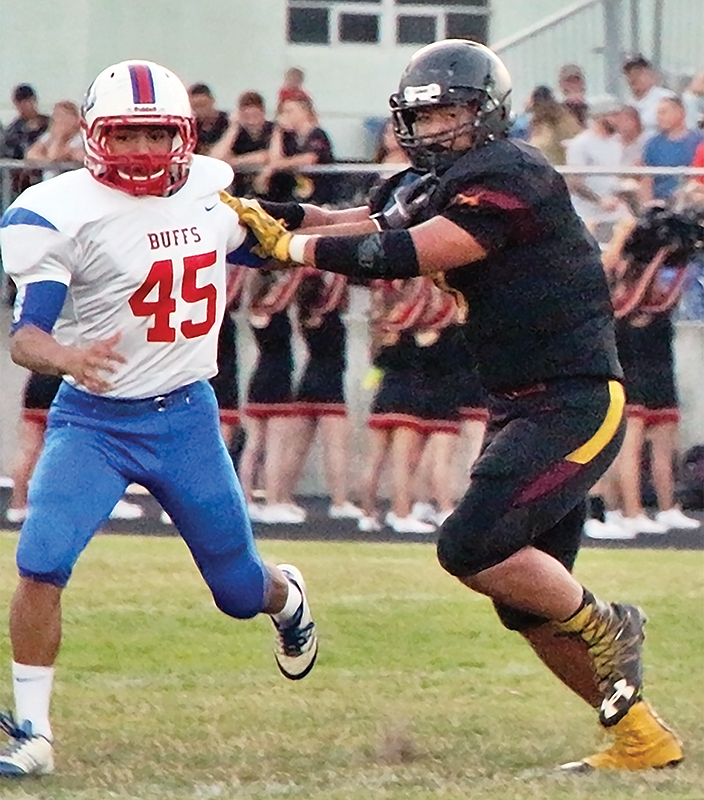 Contributed photo/Bryan Dean
TD football player Dalles Seufalemua was named to the OSAA’s all-state squad for his stout play on both sides of the ball last fall. The junior earned second-team recognition at offensive line and honorable mention on the defensive line.

If a top athlete is willing to sacrifice stats and accomplishments for the betterment of the team, great things happen.

A running back through much of his football career, The Dalles football player Dalles Seufalemua made a switch from the backfield to the trenches opening holes and protecting his quarterback as an offensive lineman.

“For the program, this shows that we are accomplishing our No. 1 goal of developing a team mentality,” TD head coach Steve Sugg said. “That is so when they go out into the world in real life, they are going to be able to work with people. They will be able to join a team — whether a business team, a sports team, a family team, or whatever, and work on things for the betterment of the group rather than the individual.”

“This is a great honor. I didn’t expect to make all-state because our team didn’t make it to state, but it shows that these other coaches noticed what I did on the field,” Seufalemua said. “It feels great to be recognized for all I have done in the sport. I have worked very hard in football throughout middle school and my high school career, and I couldn’t have done it without my coaches, teammates, family and friends.”

During league play, Seufalemua had his name called as a first-team winner on both sides of the ball and earned Lineman of the Year honors to lead The Dalles.

Defensively, the Riverhawks allowed 274 yards a game, 4.3 yards per play and a 31 for 106 split on third down conversions.

Seufalemua had 37 tackles, 14 for loss, with a sack, an interception, a forced fumble, two fumble recoveries and added a blocked kick to get his postseason nod.

“Some of his finest attributes as an athlete are his commitment to the team and his desire to excel,” Sugg said. “Dalles has always expected the most from himself and his team. Dalles is a leader by example, off and on the field.”

This year, Seufalemua had a chance to work with former state-champion coach Andy Codding, and through his attention to detail and emphasis on technique, those elements worked wonders in terms of his overall game.

“My success this year has definitely given me more confidence than I have had,” Seufalemua said. “I just pushed myself harder. Every practice, I have improved on something — foot work, reading plays on defense and offense, and I thank the coaches and coach Codding for that. Knowing that I made all-state shows that I can do anything that I put my mind to as long as I push myself. I really worked hard for it, so I am happy that I made it.”

Seufalemua is eyeballing some game action in late November next fall, which would mean that the Riverhawks are flirting with a state crown.

With a talented core of 16 incoming seniors expected to return, that goal is within reach.

“I feel great about what we can accomplish as a team,” he said. “Everyone is going to be one year more experienced, and all of us, as a team, can’t wait to get back to working even harder to get ready for next year.”

Many of the underclassmen who were thrust into action this season will become more seasoned veterans ready for the heat of battle.

As an incoming senior, Seufalemua is focused on being a commanding presence in the huddle, so The Dalles can continue building on its gridiron legacy.

“I believe that the team will be determined to do better, and they will work hard all through the offseason to improve their skills and improve our skills as a team,” Seufalemua said. “That has been a good thing in my last couple years at The Dalles. We have grown closer and closer like a family. I will miss that when I graduate.”