Tournament playoffs are set for Feb. 15-16 in Madras 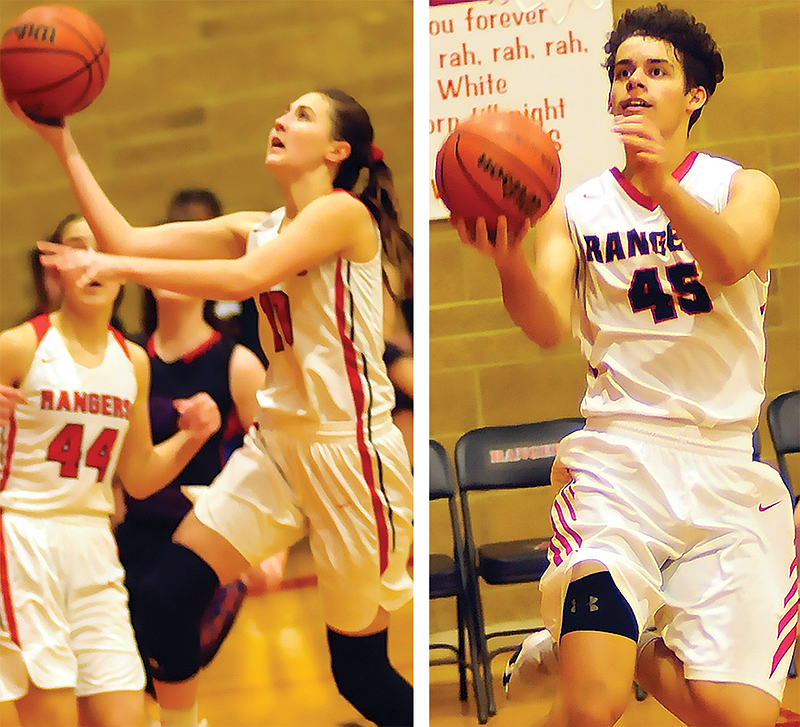 Photo by Ray Rodriguez
Dufur Ranger players, from left to right, Jessica Brown and Trey Darden were in action last weekend for Big Sky Conference games versus Ione and Mitchell-Spray.

DUFUR – The Dufur Lady Rangers extended their win streak to six games, vaulted to No. 22 in the rankings and climbed into a third-place tie with Echo after league victories over Ione and Mitchell-Spray this past weekend.

Friday, Jessica Brown scored eight of her 10 points in the fourth quarter, including a couple of late free throws, to help the Rangers pull off a huge upset over No. 17-ranked Ione (14-3 overall, 9-1 league), 32-30, at Ione in Big Sky Conference girls hoops action Friday.

Coming off the big win versus Ione, Brown scored 12 points, Crawford poured in seven and both Bailey and Katie Beal tacked on four points each in Dufur’s 36-13 win at home Saturday over Mitchell-Spray (1-16, 0-10).

The Lady Rangers, who hit for a 22-9 halftime cushion, totaled 17 field goals, one 3-pointer, and made 1 of 6 free throws, as eight different players hit baskets.

After Tuesday’s game at No. 7 South Wasco County, Dufur hosts Sherman at 4 p.m. Saturday, and travels to Spray for a league tilt versus Mitchell-Spray at 6 p.m. on Tuesday, Feb. 5.

DUFUR – Every part of the Dufur Ranger game has been clicking of late and they are getting stronger down the stretch.

Dufur all but put the game away with a 43-24 first-half outburst.

At home Saturday versus Mitchell-Spray, No. 15-ranked Dufur posted its highest point total since Dec. 15 with an 80-33 romp.

Radcliffe paced the Rangers with 20 points, Bales notched 15 and Darden ended up with 12.

Masterson scored ninepoints and McLaughlin ended the night with seven points for the Rangers, who reeled off 25 field goals, one 3-pointer, and connected on 9 of 18 free throws.

The No. 7 South Wasco County Redsides defeated Mitchell-Spray by a 58-32 margin and cruised past Condon-Wheeler, 45-15, Saturday in girls basketball action.

In their lopsided road win, the Lady Redsides led 38-17 at the half and closed out Mitchell-Spray 20-15 in the second half.

Abby Birman led SWC with 19 points; Jada Myers followed up with 13; Hailey Ocacio added 10 and the tandem of Madisen Davis and Destiny Mora-Lopez were good for six points as the team totaled 26 field goals, one 3-pointer, and converted 5 of 15 free throws.

Saturday in Maupin, Birman scored 12 of her 17 points in the first half as the Redsides built a 26-7 halftime cushion in their 45-15 triumph against Condon-Wheeler.

Myers followed with 11 points; Mora-Lopez checked in with seven; and Kyrsten Sprouse ended up scoring six points to spearhead SWC’s surge of 19 field goals, three 3-pointers, and made 4 of 10 free throws.

The South Wasco County Redsides finished the last two minutes of regulation with three players on the floor and nearly pulled off a victory Friday in a 56-47 loss to Mitchell-Spray.

Ben Birman, Garrett Olson and Tanner Davis fouled out and Haiden Perez sustained an ankle injury in the final period.

With two minutes to go, Davis fouled out, which left the Redsides with Oscar Thomas, Alex Stebbins and Marshall Bell on the floor.

SWC cut it to a four-point deficit with three players, but just could not get over the hump in the final moments.

In three quarters, Olson racked up 28 points and 14 rebounds, Thomas had 17 points, six rebounds and two steals. Davis played lockdown defense on Mitchell’s best player and although he didn’t score, he chipped in four steals and six assists.

In Maupin Saturday versus Condon-Wheeler, the Redsides fell behind by 18 points in the third quarter and trimmed it to as low as five points, until the Knights expanded on their lead, 54-42, entering the final period.

The Redsides hit 21 field goals, five 3-pointers, and converted 8 of 13 on free throws.